Colorado MahlerFest, which had previously announced the cancellation of this year’s in-person festival, announces the 2020 Virtual Colorado MahlerFest, May 13-17, 2020. The festival has curated a collection of performances, films, a virtual symposium, art gallery, and more which will be released each day at 3:30 p.m. Mountain Daylight Time. Materials will be released across a number of online platforms and collected at MahlerFest.org/MahlerFest-Online. Among the highlights, acclaimed pianist David Korevaar will perform Schubert’s Piano Sonata in B-flat Major, D. 960 on May 13 at 3:30pm MDT. | full article

An Interview with David Korevaar by Robert Hjelmstad, 5/10/20

During the Covid-19 quarantine period, pianist David Korevaar took to social media to share an ambitious personal project; he set himself the challenge of recording (from his living room) and sharing (via Facebook and YouTube) all 32 Beethoven Piano Sonatas. The original time frame for the challenge was 60 days–he eventually finished the project in 41. The recording project was enjoyed by his long-time fans and also introduced the artist to some people for the first time.  |  full interview

“Korevaar, the Helen and Peter Weill Faculty Fellow and a distinguished professor of piano at the CU Boulder College of Music, is planning to play all of Beethoven’s 32 piano sonatas over 60 days. Each will be posted in turn on his YouTube channel.”  |  full article 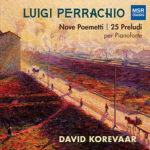 Born in 1883, the Italian Luigi Perrachio often is best described as an Italian impressionist— as Grove Music Online says, “Debussy and Ravel are rarely left sight of for long”. And a lot of the music here does remind me very much of Ravel and Debussy. Other pieces, like the fifth of the New Poems, seem to have the harmonic simplicity of Copland’s American works. Still and all, they mostly remind me of Ravel, particularly the aphoristic 25 Preludes, which Grove identifies as his best known work. They require a pianist with virtuosic technique and an artist’s sensitivity for producing a wide spectrum of tone color. David Korevaar is the right pianist for these pieces. Previously lauded by Mr Becker for his Ravel program (Jan/Feb 2006), he excels here as well. We haven’t reviewed any of Perrachio’s music as far as I can tell, and he is scarcely represented in the current catalog. Knowing his music better certainly helps to flesh out the picture of early 20th Century Italian music. But I hope Korevaar will record more Ravel and also Debussy. I know the competition is keen, but I believe what he would do with those great compositions would contribute significantly to our experience of them.

“In addition to playing the demanding piano part in the Elgar, (Korevaar) took on a challenge few pianists would dare: one of Franz Liszt’s legendary arrangements of the Beethoven symphonies for solo piano. These arrangements are notoriously difficult, among the most challenging things for any pianist to tackle. In Korevaar’s hands, the Fourth Symphony lost none of its identity despite the absence of the orchestra. This is a testament to both Liszt’s skill as a transcriber and Korevaar’s pianism. The perpetual motion finale—certainly not idiomatic for the piano—was breathtaking. In fact, this may rank as Korevaar’s finest Boulder performance in several years, and that is saying something.” | full review

“The Italian composer and pianist Luigi Perrachio was born in Turin in 1883 and first learned music as a child from his father, an amateur pianist. After gaining a law degree in Turin he studied music in Bologna before travelling to Paris, where he first heard the music of Ravel and Debussy, who greatly influenced him. Perrachio then settled in Turin, where he taught at the Liceo Musicale from 1925 to 1955. As a writer, pianist and conductor, he was a propagandist for contemporary music and an educational reformer. Of his modest output, in the Debussy-Ravel tradition, the 25 Preludes (1927) for piano are best known. He was important in promoting new through his activities as a performer and organizer, especially with a group he put together, the ‘Double Quintet of Turin’. He was far from prolific as a composer, only as a consequence of significant arm-twisting from his friends. Innate shyness, combined with an aristocratic sense of composing, led him to publish only a small part of his works (especially those for piano and lyrics) and starting from the mid-twenties to confine himself to a sort of voluntary isolation. On this beautifully produced CD, the brilliant American musician David Korevaar gives intelligent, thoughtful and dynamic performances of piano pieces by Luigi Perrachio – bringing this deightful assured music to a much wider audience. ‘A musical epiphany.'”

These virtual recitals with pianist David Korevaar and violinist Charles Wetherbee will be live streamed at The Dercum Center’s website: