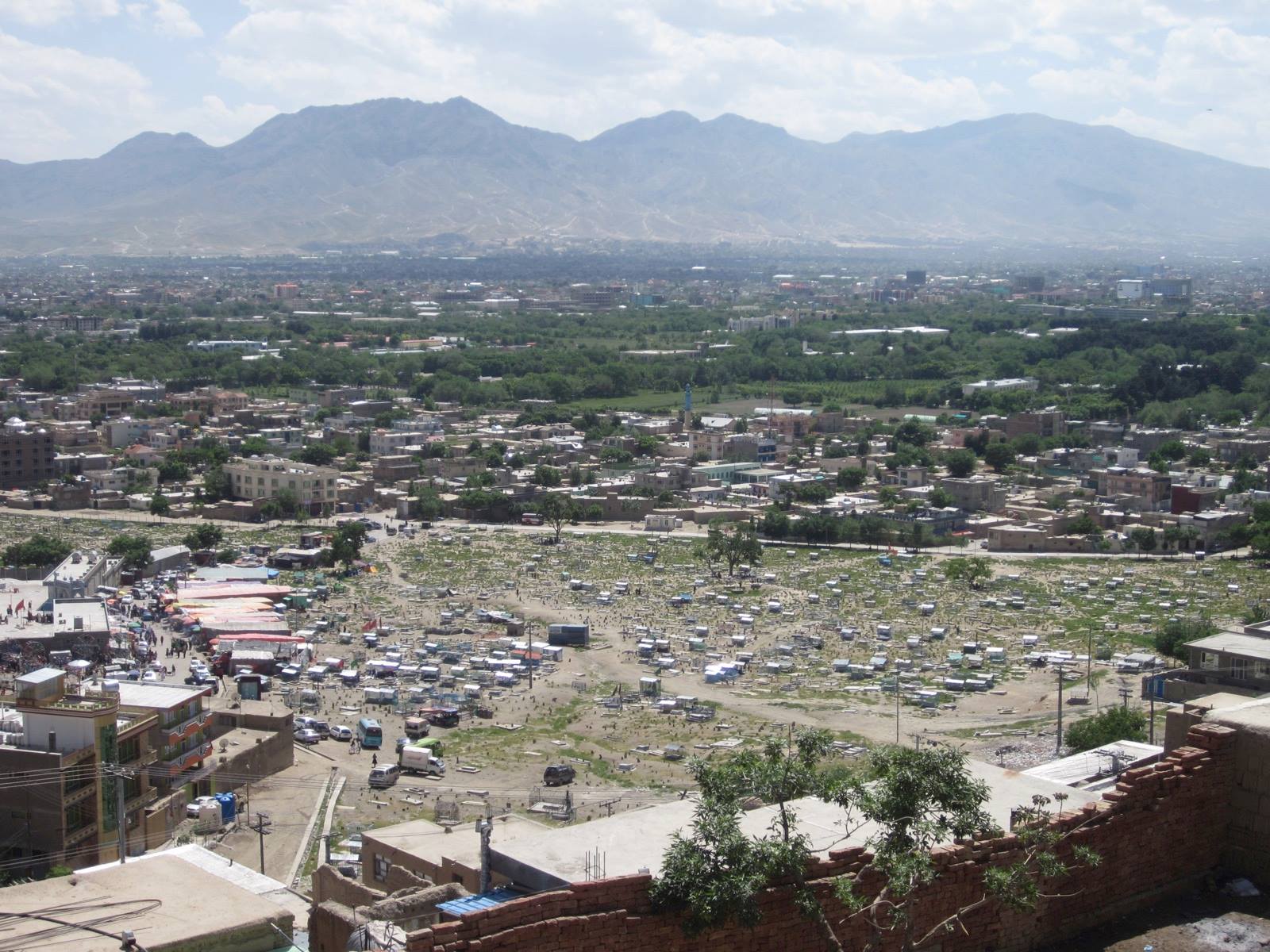 After almost a week in Kabul, Afghanistan, I’m having the time of my life. I thought of starting with “It’s been a quiet week in Kabul” in a nod to Garrison Keillor’s Lake Wobegon, but thought better of it: after all, the last thing one could say about this city is that it’s quiet. 3.7 million people living in a low-rise metropolis sprawling over a broad valley surrounded by mountains—some very high ones (think the Utah Valley)—in which there are too many cars and too few good roads, plenty of roosters and dogs, and native birds and loudspeakers broadcasting the call to prayer from every direction starting at 3:30 a.m., and Chinese ice cream carts that play (I kid you not) “Happy Birthday” incessantly: not a recipe for “quiet”!

As an obvious American here, I can’t go out and walk (or run, as would be my habit at home or elsewhere abroad) in the streets—there is enough evidence that there is a high risk of kidnappings at this point. The expats I’ve met have various solutions to this beyond the obvious use of a driver in a non-descript car (taxi or Toyota). The most common is to take up riding a motorcycle. So, from my car-window vantage point what I see is a city that functions in its own chaotic way (not atypical for this part of the world) in spite of the omnipresent fortifications (security for private homes, police installations, and any other number of places including universities and the music school itself) and men in uniforms of all kinds casually carrying machine guns at guard posts and in front of higher-end businesses. On the other hand, the streets themselves are teeming with people carrying out their daily lives, from street food to amazing looking produce stalls (lots of these)—the piles of watermelons are especially impressive (and delicious). The men are dressed in all manner of traditional ways, mostly the shalwar style (tunic-like long-sleeved shirt to

mid-thigh, loose trousers in the same light fabric, and a vest to decorate the generally subdued color of the uniform), but also in more western clothes (trousers and long-sleeved button-down with a jacket over). I see relatively few women in the blue burka of the most conservative families—most are dressed stylishly and colorfully, with head scarves artfully draped. Dare I say that this is actually very alluring? For a style of dress that we see in the west as repressive (and I won’t deny that experience for those who have had it), the creativity of the women is wonderful: there seems to be a great deal of joy expressed in the colors and style of dress, in spite of the requirement for covering up.

ANIM, the Afghanistan National Institute of Music, is the inspired creation of Ahmed Sarmast, a bundle of energy, a man with a mission, someone who manages to navigate the politics of running a school and the politics of existing as part of a government system that is full of corruption, wild ideas, religious pressures, capricious edicts, you name it. He is a tiger in defense of his mission to educate everyone and to do it with boys and girls together and to preach the message that music is a civilizer and peacemaker. Within the walls of ANIM he largely succeeds; it’s what’s outside the walls that is beyond the control of anyone, with family pressures on the students in many flavors, especially for the girls, many of whom are refugees from more conservative parts of the country. The school tries to be a safe and equal-opportunity environment, where children of all economic and social strata can don their school uniform and function together.

Personal highlights of the week:

The Pipes are Calling: Ars Nova Presents an Irish Classic

Ars Nova Singers perform Irish Tune – with stunning nature photography of Boulder County’s Indian Peaks wilderness by pianist David Korevaar from the CU College of Music. David also presents a piano performance of this stirring work at the close of the video.

Seating by reservation only. Please call 303.806.8196 or email at ebertoluzzi@hotmail.com.

Masks and social distance are required in the Englewood Civic Center.