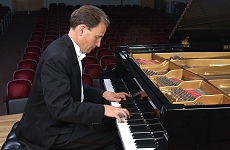 Looking back, now that the boxes of CDs nested in their cellophane cocoons with their lovely blue booklets are a fait accompli, the time I’ve spent with Bach’s Partitas has been ear opening, mind expanding—a wonderful learning experience. Yesterday I performed the first Partita for a small, appreciative, and attentive audience in a salon in Japan, and enjoyed re-creating this music once again. Each performance, as I am still learning, has the potential to be its own wonderful adventure. Especially with this repertoire, I feel like I am living and breathing with the music, creating a new organism with each time I begin. No two performances come out the same—different ornaments demand to be heard, articulations are more or less sharply characterized, arpeggios move with a life of their own, the inner voice of the dance asks to be introduced in a different way.

I posted a couple of brief explanatory videos about my approach to the Partitas on YouTube the other day ( on Articulation and Expression and Sinfonia of Bach’s Second Partita), and a user responded with a lovely comment about Bach: “I have always found it hard to believe that the mind which produced these wonderful works could have been as rigid as modern interpretations suggest and conservatories demand!”

It makes me think: what do we as teachers demand? What do we as performers do? Do we make our students brave enough to defy what they think is the received wisdom? After all, we professor types talk a good game about projecting the character of the music, and yet students are shy about really doing it. I have a hard enough time being self-confident enough to free myself of the need to be “correct.” After all, with our classical training, we’ve been indoctrinated since childhood into the cult of playing the right notes and the right rhythms; what happens to that when we try to give ourselves permission to improvise? It is unsettling to throw yourself in harm’s way: what if the spontaneously generated ornament or figure fails to spin properly? What if those notes on the piano won’t respond quickly enough? Even worse, what if I fall out of the pulse or the harmony while making something up?

Beyond the philosophy of recording lies the problem of performing. As I wrote in the CD booklet for the Partitas, “In recording the Partitas, I have sought the freedom of live performance. The recording sessions were an opportunity to produce multiple versions of the individual movements, experimenting with embellishments, pacing, and the subtleties of rhythmic treatment that bring these dance-inspired pieces to life. I wanted the result to feel spontaneous—a snapshot of the moment of performance, rather than the definitive last word.”

Of course, performance is the real thing; recording is inherently artificial, frozen, each play the same. But the experience of trying things repeatedly in recording sessions (after a great deal of preparation to develop an appropriate vocabulary of embellishments) has made me more willing to take risks in performance. I have nothing but admiration for someone like Robert Levin who manages to both produce high-level scholarly investigations of embellishment and extemporize in the musical language of the late eighteenth century to an equally high standard. That level of intellectual and physical fluency represents a kind of genius I can only aspire to—something like bilingualism, or at least the gift for multi-lingual fluency (written as I continue to try to function in Japanese at even a rudimentary level after more than twenty years of travel to Japan).

So, my recorded versions of Bach’s Partitas are cocooned in their packages, the ephemeral moments of music and improvisation captured in one version, ready to spread their colorful wings the same way a thousand times. But I will go on and continue to perform this and lots of other music. And no two performances will be the same, no two sets of wings identical in color and pattern. And I hope I am daring enough to be spontaneous no matter what I am playing, and that I can inspire my students at least to do the same: performers shouldn’t just re-create the music, they should transform it.