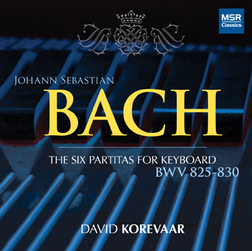 In just a few weeks, I’ll sit down at the piano in the University of Colorado’s Grusin Music Hall, and begin recording Bach’s Six Partitas. As I’ve planned and prepared for this project, I’ve given plenty of thought to it. The first question to ask, of course, is why? Does the world need another recording of this music? Do we need another recording of these pieces conceived in the eighteenth century to be played on the harpsichord?

Obviously, I believe that the answers are yes, but it’s hard not to feel like the whole endeavor is an act of hubris or pure vanity. It’s easy enough to be intimidated by great repertoire, and by all the great performances that already exist. I’ve had the pleasure of listening to many recordings, and of enjoying many of them. Even after that, I think I bring something of my own to the table—something that I want to share with an audience. This music is filled with humanity. One of the great musical minds of history bent his will to summing up courtly dance music in stylized versions for keyboard. The result is a fascinating mix of dance, song, and intellect.

And I hope to contribute an essentially human performance. One of the hardest things to capture in recordings of classical repertoire is the sense of improvisation, the spontaneity of the inspiration of a moment. In our search for perfection of execution, we lose sight of the real reason for the music in the first place.

One of our doctoral students in piano, Pia Bose, recently gave a presentation that introduced me to the concept of “embodied perception” –something that the Swiss composer Frank Martin derived from his work with Dalcroze and the concepts behind eurhythmics. I thought this was a wonderful connection with all music, of course, but with the dance suites of the Baroque era in particular. After all, what is it to play a Bach Courante or Sarabande, but to embody the idea of the dance, and to have the sense of improvising a melody, of ornamenting the rhythm and harmony, to bring the spirit of the bodily motion inherent in the swing of the dance to life?

So, going into these recording sessions, I need to practice what? I need to practice making the music up each time I play through it. I need to develop a repertoire of breathing, of rhythmic choices, of rhythmic understanding to encompass the range of expression inherent in, for example, a dotted rhythm. How rich this music is in different kinds of dotted rhythms, none of which really should sound precisely the same. I need to have the courage to employ the slight swing of the French notes inégales, where evenly notated scales are given a charm and expression by making them uneven. It is hard for us as “classically trained” musicians to let go of our adherence to a pedantic reading of a score. It is liberating to see that even shortly after the publication of Bach’s Partitas, members of his circle were adding notes and ornament to the “original.” In fact, the vaunted Urtext is provisional—it is only the momentary state of the music at the time that the composer put it down. Every performer and performance creates a different state. Performance and recording require the courage and strength to be free.